What you are looking at is an Excel 2013 worksheet containing a VLOOKUP formula written slightly incorrectly, giving completely the wrong result. What you can also see is Excel giving two indications that something might be wrong. However if you put "background error check excel" in to Google you will find as many links telling you how to turn it off as how to use it properly.1 As I'll demonstrate, using it to trap this particular error scenario is not straightforward. If you'd like to follow along the workbooks are in the 2013 folder in my Github repo. Please star it if it helps you.

I've spent a lot of time over the last several years in big corporates teaching people how to use Excel. In that time I've seen plenty of VLOOKUPs that have been entered like this. What's more I've heard the use of this particular formula syntax (with the second argument specified as columns, this is the greedy in the blog title, and the deliberate absence of the final argument) advocated at a peer to peer level, in other words, colleagues learning from their colleagues.

In the rest of this post I'll examine what's going wrong, how Excel is trying to tell us and where that explanation requires some intuitive leaps which are most likely beyond the understanding of novice spreadsheet users.

The following image is the function wizard dialogue for the particular formula in question and I draw your attention to the elements I've labelled 1 and 2. 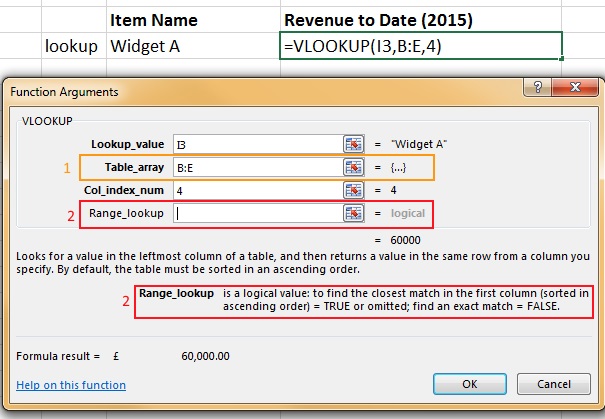 So, in summary, the final argument is wrong for matching on text values and the second argument should be more parsimoniously stated. But what does the error checking say?

Quite honestly, that doesn't seem like a big deal to me. I've also run the INQUIRE workbook analysis on this book and in the report the following information is presented. I've drawn out the salient points for you because frankly, it isn't obvious. 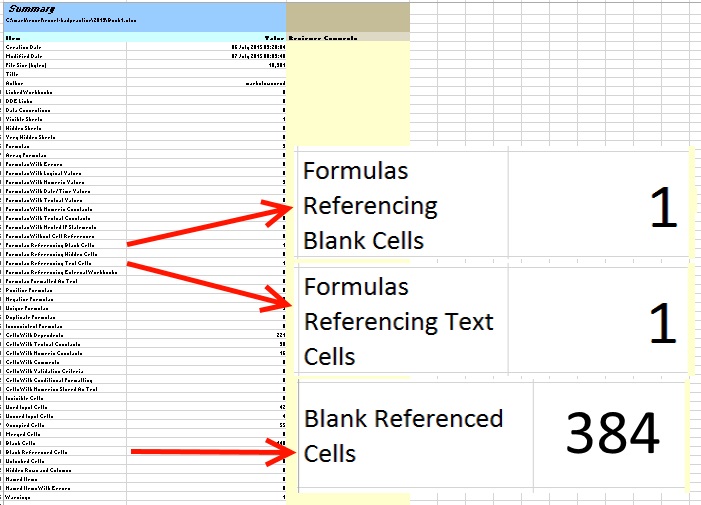 Once again we're referencing blank cells. Once again, no big deal. We also have a formula referencing text cells. Well that's what we wanted we're matching on the widget name after all so, no big deal. Granted, 384 blank referenced cells jumps off the page a bit but that's just stating the first point the other way round so, no big deal. But, the error is egregious! We're reporting the revenue for the full year 2014 sales of Widget A instead of the part year 2015 sales. Where is the warning:

Instead it's a meeker:

Taking the text 'error' first and drilling in to the appropriate sheet [Text Cell Refs] on the analysis workbook we should interpret it like this: the formula is a lookup and it is working on cells containing text. We have to link that in our mental Excel heuristics dictionary to the rule of thumb: matching on text values must be exact. Having made that association then we know we must make a correction to the formula at least as follows, from =VLOOKUP(I3,B:E,4) to =VLOOKUP(I3,B:E,4,FALSE). Now, this will be enough to fix the error but let's continue.

Taking the two blank 'errors' next and drilling in to the appropriate sheets [Blank Cell Refs] and [Blank Referenced Cells] on the analysis workbook we should interpret it like this: the formula is a lookup and it is looking up in a range that contains blank cells. Now in and of itself that is not a problem for a lookup (performance notwithstanding). In fact this analysis is a very indirect way of zeroing in on the real issue. But, at this point we should consult our mental Excel heuristics dictionary for the rule of thumb: parsimony over greed when consuming arguments in a function. If we're not swayed by this we should, at a minimum, traverse the entirety of the left-most column (B)3 of the Table_array (that's the column where the Lookup_value is being matched) and in so doing we would discover the data for 2014. We could then move the 2014 data somewhere else which would fix the error, in which case we could leave the formula unchanged and ignore or dismiss the error. Hence why I stated earlier that this analysis is only an indirect way of identifying the issue. Instead however, we will make a correction to the formula at least as follows, from =VLOOKUP(I3,B:E,4) to =VLOOKUP(I3,B3:E6,4). That will also be enough to fix the error.

I think you'll agree that none of that was particularly obvious. That's because that use of the formula is not wrong, per se, it's only ill-advised. Therefore it's difficult to catch it. Were there a syntax error Excel might catch it as a #REF! or it might pop up a warning and prevent the formula from being calculated. But it can't tell you this is outright wrong because it's not. But it is!

In order to address this, in my opinion, Excel should have a novice mode. I will expand on this in future blog posts but for the time being, that novice mode should have the following functionality:

I know I'm not the only one with a view on the Excel flexibility vs control debate. There are parties trying to address this by bringing software development best practice to spreadsheet development with unit/ integration testing and peer review among other things. There are companies selling rules based automated monitoring. There is more training available than you can possibly imagine. And there's also error checking in the box. But when a novice opens Book1.xlsx and enters some data and a formula, that's spreadsheet use, not development. And there's currently nothing to stop them doing it wrong. I'd very much appreciate any comments you would like to share on the idea of a novice mode. In the near future I'll write some more posts further examining this.